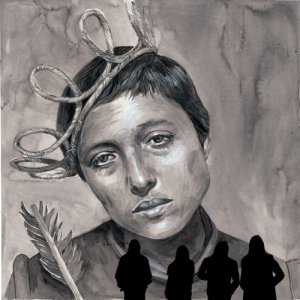 Publisher’s Note: “Joan of Arc has always been an unpredictable band. In their 17-year history they have consistently sidestepped convention and expectation, often leaving less-adventurous listeners scratching their heads in the wake of their insane (and perhaps brilliant) endeavors. In 2011 Joan of Arc released their most conventionally rocking album in years, the Albini-engineered Life Like. Now, the band explores the other extreme: an epic instrumental soundtrack to the 1928 silent film The Passion of Joan of Arc. Recorded live on opening night of the 2011 Chicago International Movies & Music Festival, the new album is the latest unexpected turn for the band. Joan of Arc have composed a dark, flowering sonic counterpart to the film s grim subject matter (a rather haunting depiction of savage religious persecution). Released in vinyl and digital formats only, Joan of Arc Presents: Joan of Arc is intended to be synced manually to the film, all Dark Side of the Moon/Wizard of Oz style.”