English title: Joan The Maid The Battles The Prisons

Check out the DVD from the  Jefferson Parish Library

Watch the full-length film free on YouTube (in 2 parts) 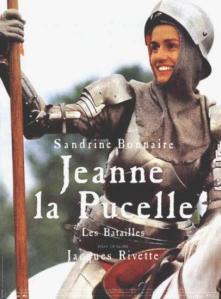 Check out the DVD from the  Jefferson Parish Library

Look for the DVD in a library near you

“Joan the Maid is the clearest and least judgmental version available. It is also the least Hollywood version. The screenplay is a straighforward, chronological narrative, and Rivette gives us a series of tableaux along the lines of a medieval passion play. The abrupt blackouts are a little distracting, but the scenes themselves are beautifully played and shot.” JLH, Amazon.com reviewer

“Jeanne la Pucelle 1. Les Batailles[Joan the Maid: the Battles]” begins with Joan’s efforts to obtain permission to see the Dauphin in Chinon and ends with his coronation….Most of the early scenes come directly from the rehabilitation hearings where she was portrayed as a faultless saint in keeping with the newly restored French government. Many of the actors in this beginning section seem to pose and speak directly to the camera rather than to each other like they were in a tableau or an elementary school Passion play. It may have been deliberate, but it didn’t work for me. What did work was the great attention to detail and the settings. Jacques Rivette went out of his way to stay with documented facts and to take advantage of the true French landmarks and countryside. I loved the way he played each scene out regardless of what happened with the horses, props, or men, letting the accidents happen as part of the action. “Jeanne la Pucelle 2. Les prisons[Joan the Maid: the Prisons]” stayed with documented facts, using a fade-to-black after every scene, to give a flawless view of Joan and the people she encountered. Sandrine Bonnaire was outstanding in every respect. Her interpretation of Joan did honor to both the warrior saint and the human girl caught up in a tragedy. The prison and trial sequences worked in every respect because the director did not do more than let each character speak his or her mind. I especially loved the early prison sequences where Rivette contrasted the world of women with the world of men, again, giving each character a full and believable voice. It is the best historical treatment I have seen in a long time and by far the best Joan.” David Clapp, Amazon.com Reviewer

Have you seen this film? Share your rating (top) and/or review it (bottom)