Have you seen this film? Share your rating (top) and/or review it (bottom)

“The Passion of Joan of Arc (French: La Passion de Jeanne d’Arc) is a silent film produced in France in 1928, based on the record of the trial of Joan of Arc. The film, directed by Carl Theodor Dreyer and starring Renée Jeanne Falconetti, is widely regarded as a landmark of cinema, especially for its production, Dreyer’s direction and Falconetti’s performance, which has been described as being among the finest in cinema history. The film depicts her trial and execution.” (From Wikipedia) The film is still sold today.

Silent films were typically accompanied by a live musical soundtrack, and still today The Passion of Joan of Arc is shown publicly with live accompaniment. Twice the New Orleans Saint Louis Cathedral has shown the film with a live improvised organ accompaniment by Samuel Liégon, now organist of St. Pierre de Chaillot in Paris, formerly the 2012-2013 Young Artist-in-Residence at the Saint Louis Cathedral. Three such soundtracks are currently commercially available: 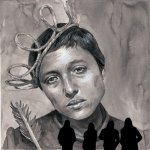