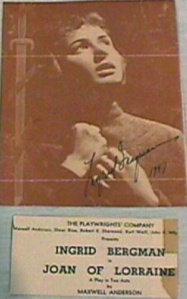 Have you read or seen this play? Rate it (top) and/or review it (bottom)

“Joan of Lorraine is a 1946 play-within-a-play by Maxwell Anderson. It is about a company of actors who stage a dramatization of the story of Joan of Arc, and the effect that the story has on them. …Ingrid Bergman was the star of the original production and won a Tony Award for this performance …In 1948, an adaptation of Joan of Lorraine was filmed in Technicolor as Joan of Arc. This film also starred Ingrid Bergman, but it did not use the play-within-a-play framework. Instead, it made the story a straightforward account of Joan’s life, omitting the fictional acting company altogether. For her performance, Ingrid Bergman was nominated for an Academy Award.” From Wikipedia