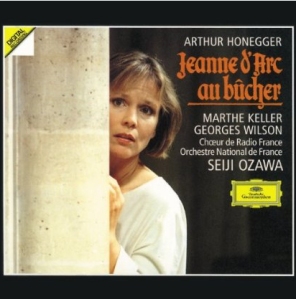 Buy this album on mp3 download and hear samples on Amazon.com

From Amazon.com reviewer Santa Fe Listener: “Honegger wrote his ‘Joan of Arc at the Stake’ as a mixed-media event in 1935, combining poetry, dramatic narration, the musical forces of a huge oratorio, and many quirky popular styles, including jazz and cabaret. The orchestra contains saxophones instead of French horns, and to add to the horror-movie tone Honegger wanted at times, there’s a spooky ondes martinots whose shrieks can pierce through lead walls. Joan’s accusers at her trial are depicted as animals backed up by animal noises from the orchestra. In a word, the score ignores historical niceties and emerges as very odd indeed. Once famous and still performed in France, Jeanne d’Arc has been neglected on CD in recent years. This live 1989 concert performance under Seiji Ozawa, done in a cavernous but effective-sounding French cathedral, gives the work its best chance for being revitalized. Joan doesn’t sing, and her fervent, anxious, tormented, ecstatic outpourings are terrifically dramatized by the actress Marthe Keller. The singing parts belong to minor characters, all done very well, and there’s male narration by a sympathetic monk, Brother Dominic, telling the story in cinematic flashback. The flashy mixture of styles can be off-putting, with Honegger juxtaposing jazz and Gregorian chant, folksongs and high religiosity–the latter searingly sincere, however. He wanted the piece to speak to the common man and woman, he said, and for seven decades it has. The story of Joan of Arc seems to be too agonizing to appeal to audiences right now, but there’s hair-riasing intensiyt here, and even if Honegger’s musical materials aren’t inspired, they are forceful.”